Weekend One Hundred and Thirty Two: Floyd's Take Away 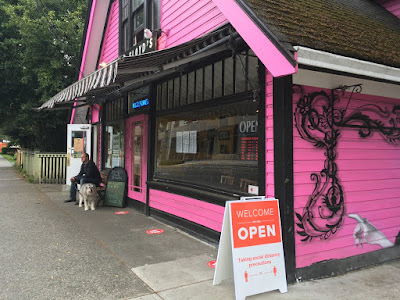 Today after leaving our secret location for a dog walk, we saw that Floyd's had reopened. The menus were posted in the window, the servers took our order at one door, and the food was available for pickup at a different door. Very good social distancing! We checked out the menu, and we found some favourites. After a photo opportunity with the #BeardedMuppetDog, our food was ready! We scampered home, popped it onto plates, and enjoyed Floyd's at our own kitchen table. 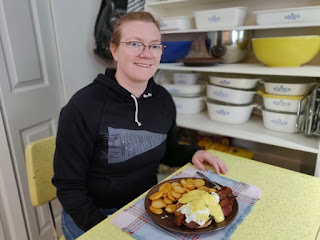 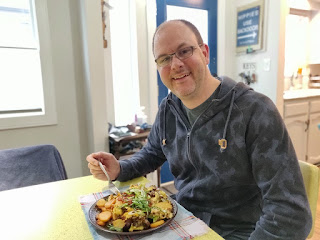 Catie chose theTraditional Benny, adding two strips of bacon instead of the sliced ham, while I selected the BC Hash, featuring bacon and sausage, eggs, onions, and peppers. My meal was huge! In related news, it tastes really good the next day, heated up for another breakfast! The coin-sliced potatoes were crispy, and the cheese/salsa quantities were just right. Catie especially enjoyed the Hollandaise sauce, and said the bacon was a delicious upgrade.

All in all, breakfast from Floyd's in our kitchen was pretty great! Will it be tasty at your kitchen table too?
Posted by Catie at 3:02 PM No comments:

Weekend One Hundred and Thirty One: Shine Cafe Delivers

Social distancing stylez continue as Covid 19 dominates our lives, but brunch survives! This entry takes place within our secret location.

Shine Cafe is open and bring you food, literally, they deliver or you can pick up. Dave and I choose delivery. I had the Cali Benny and Dave had the Breakfast Hash. Our brunch was delicious and filling. The hollandaise travelled well, just like the rest of the food. 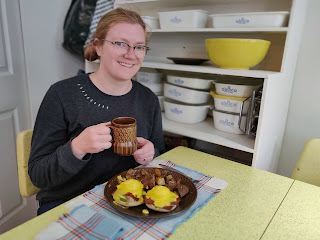 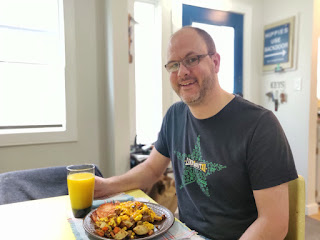 It's a super challenging time, but brunch from a fantastic local restaurant really helps! Thanks Shine!
Shine Cafe, 1548 Fort Street
Posted by Catie at 11:44 AM 1 comment:

Weekend One Hundred and Thirty: Brunch with the Morning People

We left our secret location for a seemingly normal dog walk. Bearded Muppet Dog lead us across the park in his normal fashion and followed his nose into Cook Street Village. Before we realized, he was moving us towards a gated courtyard. A brightly coloured food truck with chalkboard menus and cheerful umbrella was in the alcove waiting to serve up breakfast. 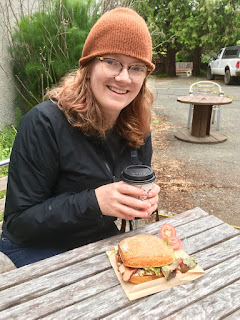 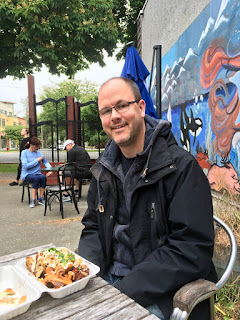 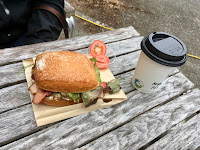 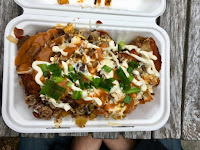 They are called the Morning People. They have local, ethically sourced food and it smelled delicious. I decided upon the "I just had the best dream" Sandwich with added bacon and a $1 coffee ($1 when ordered with a sandwich), while Dave chose the Smashed Hash with added sausage. Initially, we weren't sure we were cool enough to eat here, but the friendly staff made us feel totally welcome. They take all forms of payment (cash, debit, visa), so don't worry about having the correct kind of money. 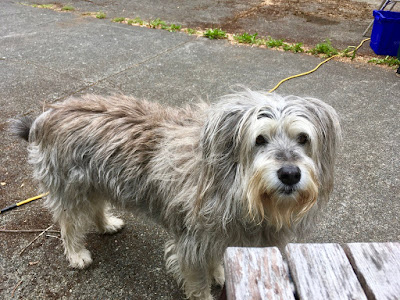 We picked a little table and took in the sights of Cook Street while we waited, which wasn't long. Our food arrived quickly and disappeared quickly too. My sandwich was the best dream. It had enough sauce to be tasty, but not too much to ruin the structural integrity of the sandwich or make the greens slimy. The egg was cooked perfectly too. The coffee is from Cafe Fantastico and is an added bonus. Dave's Smashed Hash was covered nicely in the delish garlic aioli and he truly enjoyed the added sausage. The peppers, onions, and mushrooms were super tasty and his potatoes disappeared so quickly, he isn't sure where they all went. 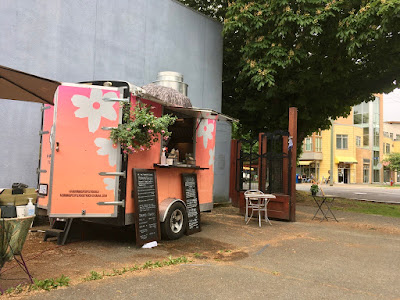 The Morning People tell us that they will be in the courtyard at 325 Cook Street for a while, Wednesday to Sunday from 8am to 3pm. Check them out and get some breakfast! They make awesome food at good prices and supporting local shops is the bomb!
The Morning People - Food Truck, now at 325 Cook Street Courtyard.
Street Food App for their location.
Posted by Catie at 11:43 AM No comments: