It was a sunny day, and we felt like a brunch adventure. Leaving our secret location, we headed out to exotic Oak Bay. After a disappointing time at the garden shop, we decided to go to the Blethering Place, a classic tea-shop in the Olde Englande model. After finding parking, we were momentarily distracted from our quest by the sight of Vis a Vis, a little Parisian-style cafe. When we saw the menu, we abandoned our previous plan. 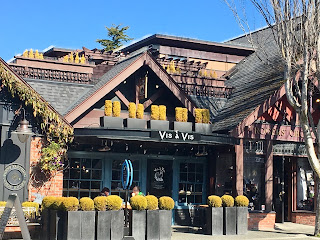 We were seated promptly, at tables with white and blue checked tablecloths, and perused the menu - a single-sided sheet of traditional tastes. As is our habit, Catie chose a coffee (dark roast, Parisian style, not burned, but a strong taste), while I requested an orange juice (orange in colour, orange in taste, fresh-squeezed?).

After debating the merits of menu items, Catie decided to go with the Classic Back Bacon Benedict ($14), substituting crispy side bacon for back bacon, adding cheese, and with the Hollandaise sauce. The Mornay sauce option was tempting, especially when we were told that it was made with five cheeses, but it was a traditional kind of morning. Turns out that all of these choices made for a super great benny! The Hollandaise was creamy and smooth, and featured the lemon. The bacon was crispy, the English muffins had been toasted on the grill, and the hash browns were buttery and delicious. 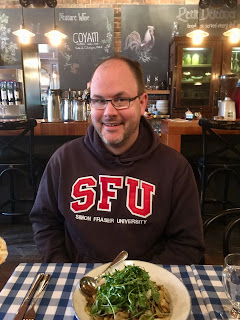 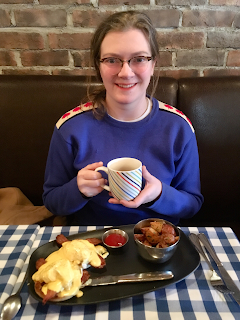 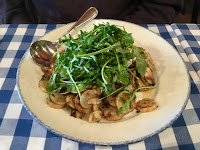 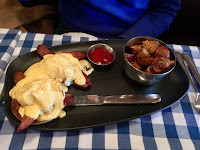 I asked the server for her recommendation, and chose the Grande Breakfast Bowl for $18. (It's French, so don't say "Grawnday!"). Duck confit won out over pork sausage, and I'm glad it did. The potatoes were soft, and the grainy mustard Hollandaise was a real treat. I'd happily recommend it! 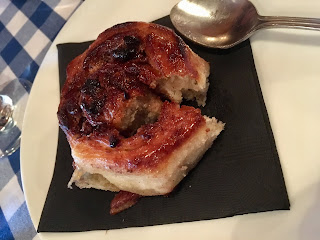 In a departure from our traditional brunch, we had dessert! The Pecan Cinnamon Bun was awesome - light in texture, sweet cinnamon interior, and toasted pecan - and it was a great ending to a tasty brunch.

We got moving pretty early for a Saturday this week, but excited to spend a sunny day on the island, we weren’t complaining. We had an easy drive to the ferry and a smooth sail to Victoria where we were met by Dave in the jazz van. Our first stop would be picking up Catie, and then on to our brunch destination: Cup of Joe’s. As a non-resident, I am aware that Victoria has a plethora of eating establishments, but I am not familiar with any of them, so I happily relied on our hosts’ expertise in choosing where to eat. 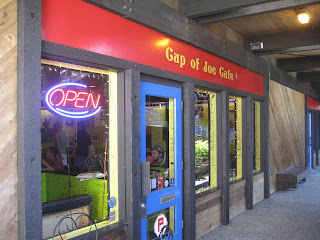 The location of the café is below street level, but with nice big windows and a friendly atmosphere, it is not dark or dreary. We were seated immediately in a central booth, with views in all directions of the graffiti covered walls and eclectic artwork, and our drink orders were taken. The café had a fun and casual vibe. With classic rock music playing and the hum of conversation, the volume level was low enough for conversation without being weirdly quiet. David Bowie and Tom Petty were good background noise for catching up with friends and enjoying a meal.

I was excited when my drink arrived because I had brought some homemade coffee along for the ferry ride over and had found it weak and disappointing. Taking my first sip from my Minnie Mouse mug, I was sad to discover a similar coffee scenario at the café. I wasn’t sure if it was my own taste buds that were the problem, because I’ve been rather stuffed up this past week, so I did my due diligence in surveying the table. By all accounts, the coffee was average at best. I was a bit surprised at this, as the very name of the café refers to coffee, but upon further reflection, I don’t think the term ‘cup of joe’ really makes any claims about quality or flavour.

For our brunch orders, alphabetically by guest, here is what we had and what we thought about it:
Catie had the Classic Benny with bacon ($13), which she found delicious, and accidentally aerodynamic. In a minor bacon cutting incident, a portion of Catie’s benny flew a considerable distance, landing with an impressive splatter a good 3 feet away from the table. Luckily the portions were ample enough in size that even with this missing piece, Catie was full and satisfied with her breakfast. 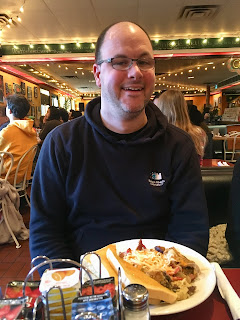 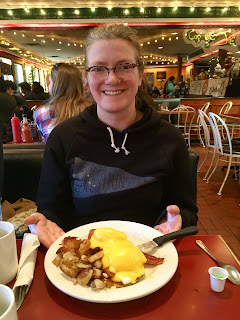 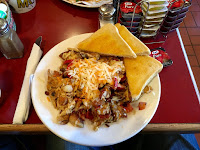 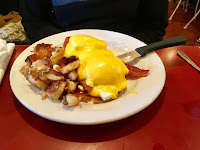 Dave ordered the Loaded Bowl ($14), which he found to be big, delicious and spicy in a good way. He felt the name was a missed opportunity. Dave’s breakfast didn’t come with any surprises, but he ate the whole thing, so I think he made a good choice.

I, Julie, ordered La Rancheros Desayuno ($14) which translates to the Rancher’s Breakfast. I am typically more of a sweet breakfast person than savoury, but it was nearing lunchtime and I’d had a piece of cake for breakfast on the ferry, so I made an exception. The description included avocado and cilantro, which is what won me over. This dish was huge and delicious with a spicy kick, and I think I finished about 2/3 of it. Michel polished off the rest. It’s possible that if I really was a rancher, I would have finished the whole thing myself, but as an interior designer, I just couldn’t do it. This breakfast also came with the world’s smallest portion of salsa, which I enjoyed with approximately two forkfuls of my meal. 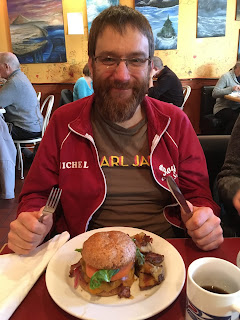 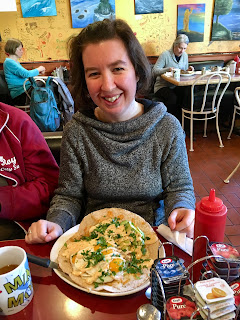 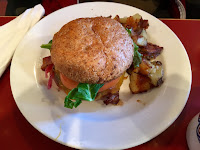 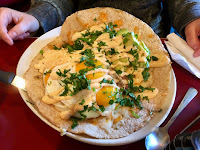 Michel opted for a lunch option, ordering the Hendrix burger with bacon and cheese ($16). He said his burger was excellent and well-built. It was tall and stacked with toppings, but somehow held together neatly while he ate it. We speculated about possible burger engineering techniques that may have been used, but we didn’t come to any conclusions because at that point there was no longer a burger to study.

All of our meals were served with ‘awesome house panfries’ which lived up to their name.
Overall, it was a great experience. Theoretically, I would go back, but with there being so many options in Victoria and the infrequency with which we visit, I don’t expect we will. That is not a reflection of the café, just life circumstances. 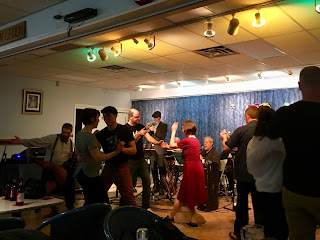 As a non-brunch-related end note, we followed our meal with an afternoon of excellent jazz at the Britannia Legion. The band, led by Lloyd Arntzen was fantastic, and we enjoyed dancing with a great group of Victoria swing dancers who we don’t get to see very often. It was a well-spent day indeed, and we do plan to return for more of the same in the future.