Weekend One Hundred and Sixteen: Cafe 1891 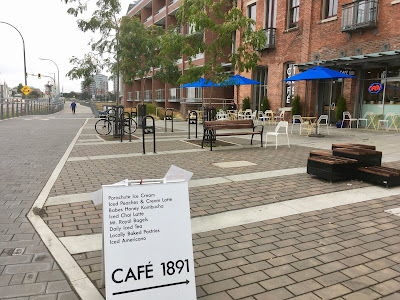 Catie, holding a Kleenex in one hand and a dog leash in the other, walked down the foggy street between two attractive but greying bros who walked, waiting for her to say something. But she said nothing; she had been silent much of the morning, except now, walking down Wharf Street, she seemed even more distant, staring out through the fog and morning light into a large void between herself and the new Johnson Street Bridge. Catie with a cold is Picasso without paint, Ferrari without fuel - only worse. For the common cold robs Catie of that uninsurable jewel, her brunch, cutting into the core of her confidence, and it affects not only her psyche but also seems to cause a kind of psychosomatic post nasal drip within the people who brunch with her (A rewritten Frank Sinatra has a cold, 1966). 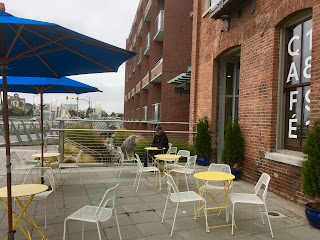 Catie, Dave, and Charlie had left their secret location on a mission to go to Capital Iron. It was the biggest outing Catie had been on since getting her sinus infection. Between blowing her nose, coughing, and lying in bed, she had been very busy for the last week. But the walk was a relatively short and simple one. Once downtown, take Wharf all the way to Capital Iron, the everything store, then home. Though today, Capital Iron would turn out to be the everything-except-the-thing-you-are-looking-for-store. 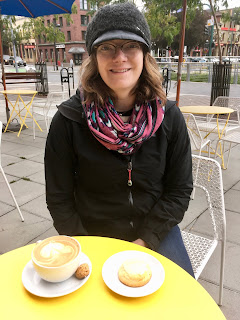 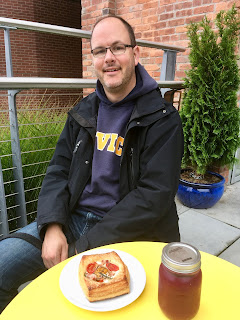 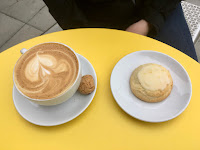 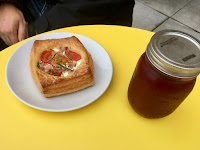 However, at Wharf and Pandora a sign caught Catie's glazed eye: Coffee, Mount Royal Bagels, Parachute Ice Cream, Cafe 1891. So they stopped. Catie got a flat white and a lemon melt cookie ($okay$). Dave got a breakfast danish, featuring ham, egg, cheese, and tomato, ($okay$) and a cold pressed hipster juice drink featuring beets and ginger ($omg$). Both Catie and Dave enjoyed their drinks and treats. They would have the flat white, lemon melt cookie, and danish again, but not the cold pressed juice though because it's just too expensive. Pro Tip: Always shake a cold pressed mason jar juice before drinking, otherwise the last gulp will be all the ginger that should have been dispersed through the first 98% of the drink (!!!).

In short, YUM and great location for people watching.