This weekend, we decided to meet our friend Kyle for brunch at Caffé Barney on Granville. (They don't have a website, but they're at 2975 Granville, and the phone number is 604-731-6446.) We have been there before, and remembered their huevos rancheros that are served in a skillet... but I digress. Back to the matter at hand. 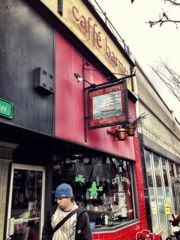 As per usual, I started with orange juice, and both Catie and Kyle had coffee. In contrast to last week, neither were served in bottles. Kyle ordered eggs benedict featuring avocado, Catie the huevos in a skillet, and I the breakfast burrito. 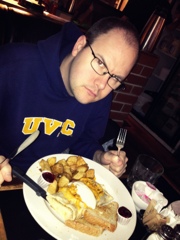 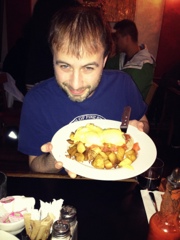 Kyle's benny had suspiciously large pieces of avocado - perhaps a whole one had been used in its production - and hollandaise sauce that "tasted really good." The huevos were indeed served hot in a small skillet, covered with melted cheese and salsa. They would have been better if they had been served with guacamole and sour cream, but the fresh salsa was delicious. The toast was also a bit strange. Perhaps a tortilla would have been a better accompaniment, she says. As for the breakfast burrito, I quite liked it, except for the pieces of potato inside. I had the same fresh salsa as Catie, and the beans inside the burrito were quite tasty. Our meal, including food, drinks, tax, and tip, came to just under $55. 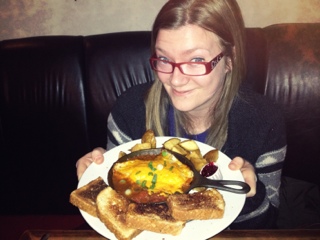 There is a bit of a low point, though, and that was the service. To be fair, they were very busy, but being handed a menu at the door and told to "go to the last table on the left, at the back, you'll see it when you get there..." was off-putting. We had been offered coffee refills when our cups were full, but when they became empty, no server with a carafe would make eye contact with us. Kyle had to beg for more before they would refill Catie's mug! Would we go back? Probably, as the service has been good in the past, but be forewarned!
Was this the perfect brunch? Not really, but it was a tasty meal and a good place to visit with a good friend. And the little skillet is cute!
Posted by Dave at 5:17 PM 1 comment:

Well, today the clocks advanced ahead an hour, and we seized the opportunity to celebrate. With brunch, of course. Today's choice was Deacon's Corner. We'd eaten there before, as they were at the Gastown Blues and Chili Fest and we really liked their chili. 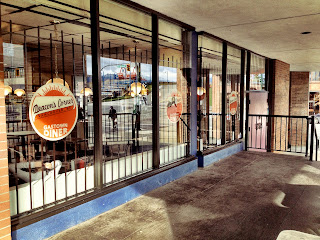 We arrived and were seated quickly. The menu is double-sided, but our eyes were drawn to the large selection of breakfast choices. Catie ordered her traditional coffee and I my orange juice, but to my surprise, it was served in a bottle! No corkscrew needed, though. After some deliberation, I chose the Mexican Scramble ($10.75) and Catie the Bacon & Egger ($7.75.) 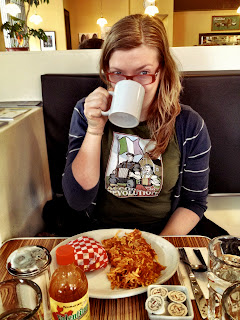 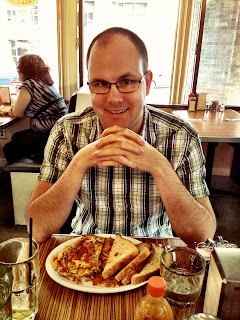 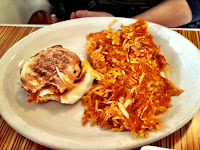 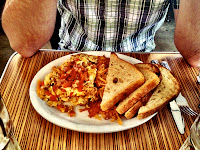 Todays' brunch was pretty good, but I'm not sure it was perfect. We'll definitely be back, though - maybe for the breakfast menu, but definitely for the chili!
Posted by Dave at 1:05 PM No comments:

I must admit, I was wrongly put off by Latitude. I suppose I thought it was another one of those pretentious restaurants that migrated to Main Street from Yaletown. I have walked past it on my way to other restaurants so many times, until this last time when I actually stopped to look at the menu in the window. I was shocked! It said "Latin American Street Food" which sounds incredible to me and I was ecstatic to see that they serve brunch.


We turned up for brunch feeling slightly anxious not knowing what to expect. We were greeted by two happy servers and seated quickly. The menu is unbelievable. Everything listed makes my mouth water. It was tough to choose, but I ended up picking the Huevos Divorciados with over medium eggs instead of sunny side up ($11). Dave decided on the Chivito ($13) with a side of Venezuelan guacamole ($1.50). I ordered a coffee ($2.35) out of habit but instantly regretted not getting a Jarritos, Mexican grapefruit soda ($3.50) which Dave ordered, and grudgingly (not totally grudgingly! - Dave) shared with me. It's not that the JJ bean coffee they serve isn't amazingly good, it's just that the Jarritos is a perfect match for the brunch at Latitude. 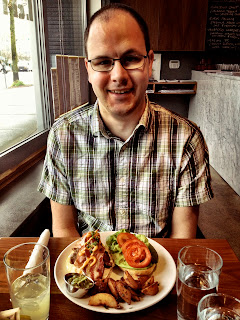 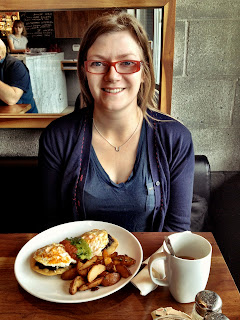 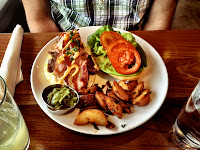 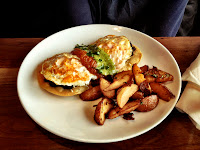 The food was heavenly! My Huevos was better than I could have imagined. It was a unique combination of flavours. It was fresh and slightly spicy-tingly in my mouth. Dave's Chivito was packed with layer upon layer of meaty taste. Both of our dishes came with fabulously seasoned roasted potatoes. The portion size of brunch is perfect! Our plates went back to the kitchen licked clean. 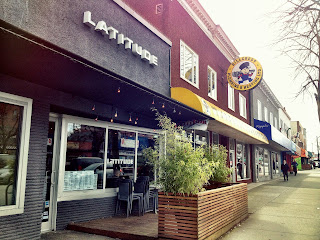 Not only is Latitude's breakfast good for your stomach, it's good for your soul. All the meat is humanely raised, the eggs are free range, and the seafood is sustainable.

This could be the perfect brunch, but I think I will have to revisit Latitude just to make sure.
Posted by Catie at 4:35 PM 2 comments:

Lured by mouth-watering smells floating up Main Street, we followed the delectable cartoon-like plume to Joe's Grill on Main Street.


The patio outside looks cozy and would be great for people watching on a sunny day. The interior is very red. It has red walls with warm wood panels and black leather seating. It's a comfortable atmosphere for a Grill named Joe's.

When we arrived, the chef was conversing with the diners. He was very friendly and showed us to our seats. The menu is simple. It has simple, understandable brunch food. Our waitress brought us an orange juice for Dave and a coffee for me. Dave ordered the House Special Omelet, which contained bacon, sausage, peppers, and cheese, and there were hash browns and sourdough toast on the side. I ordered Blueberry Pancakes which come with your choice of bacon or sausage. I picked bacon of course. 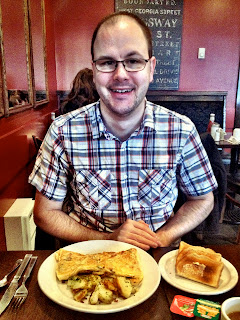 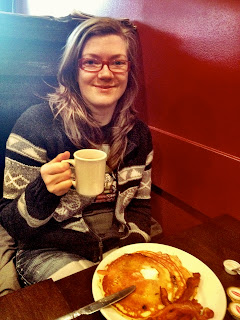 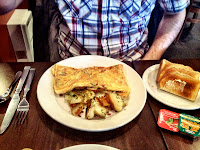 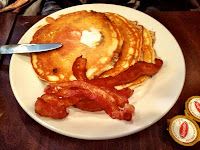 Dave polished off his omelet with a huge smile on his face. I thoroughly enjoyed my pancakes which smelled and tasted incredible. If I could find blueberry pancake perfume, I would wear it everyday. I only wish that I could have finished my pancakes. The serving is enough for two people. 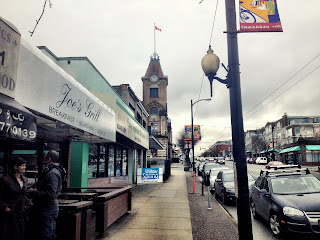 We will definitely be back to Joe's Grill for another brunch. Perhaps next time we will share the blueberry pancakes.