Weekend One Hundred and Eight: BC Ferries Coastal Celebration Buffet 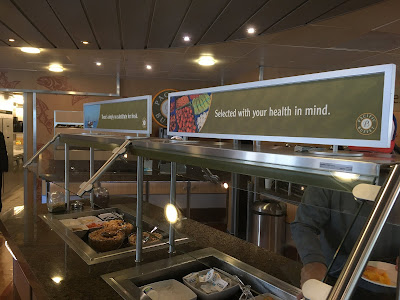 It would be rude to start this post off with the words Just Don't, so I won't.
Dave and I were travelling back to our secret location in Victoria from our secret location in Vancouver one morning and thought since we have reviewed a BC Ferries Cafeteria Brunch that we should do a buffet too. So reader, we will eat there so you don't have to. 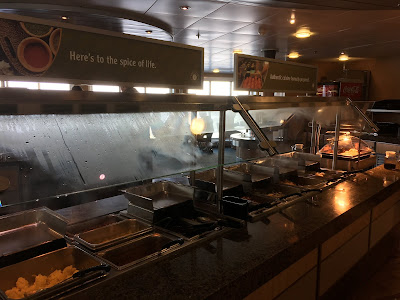 First  we must tell you that it is EXPENSIVE! $21 each (plus tax) gets you in. We then found a table and sat ourselves. In the past lovely BC Ferries staff would seat you at a table, no longer. Now groups of two sit at tables for four and then larger groups are either forced to wait or take unreasonably small tables. Now perhaps this is a one off, but I won't be going back to find out.

Dave and I found a centrally located table and then hit the buffet. After paying $21 dollars to get in, it feels mandatory to take them up on their "all you can eat" offer. We loaded our plates a few times. 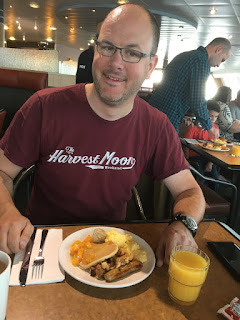 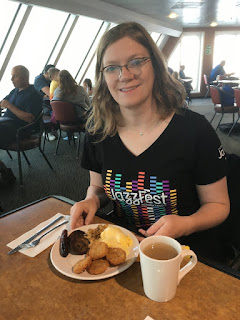 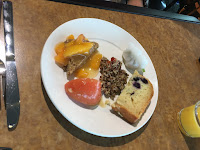 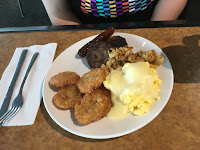 Something else you should know about the buffet is that they don't serve bacon. You can get bacon in the cafeteria but not in the buffet. In the buffet you can have breakfast sausages or chorizo patties (meat type: unknown). The eggs only come scrambled and I would put money on them being powdered. There are two redeeming items in the buffet: unlimited coffee and tea and the potato patties. Dave quite liked the waffle toppings: strawberry, peach, and blueberry sauces, with whipped cream.

The atmosphere of the buffet the day we visited was that of a child care center. Some were bouncing on the chairs, some were playing with the food, and some were walking around screaming because they were upset that the waffles had run out. It isn't an atmosphere that I enjoy, but perhaps you would. 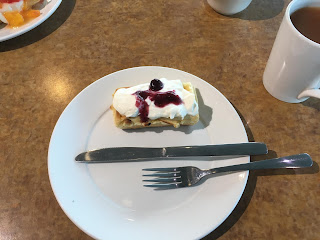 I will finish this post with these words: Just Don't because there are better ways to spend $21 on BC Ferries.

The Pacific Buffet, many BC Ferries on the Tsawwassen to Swartz Bay route (but not the Coastal Renaissance.)
Posted by Catie at 6:22 PM