Weekend One Hundred and Four: Hindsight is 20/20

Another milestone! We did a retrospective at Weekend Fifty-Two, so now that we have reached Weekend One Hundred and Four it makes sense to do it again. Oh-Ya!

Here's some updates on our previous answers about the blog:

Our go to brunch spot, even though it's not reviewed every time: Heron Rock

Catie's Preferred Coffee: Habit (which we will review in the future, promise!)
Best OJ Value: still the Nice Café. $2.95 for a large glass! Citrus-o-licious. 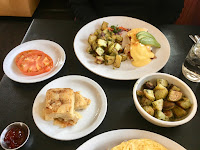 Best Benny: Vis a Vis
Masterfully Cooked Potato: For Traditional potatoes look no further than Heron Rock. For more eclectic potatoes go straight to Mole, Pesto or Gratin!
Best Toast: Sourdough!
Farthest Afield: Brunch in the Sky with Lufthansa Airlines
Grooviest Background Music: Cup of Joe
Just Too Much Food (but that's not really a problem): The Mahoney at Floyd's 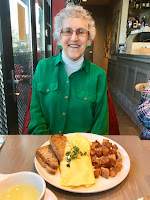 Most Comical Guest Food Critic: Julie and Michel as seen in Weekend Ninety-Nine: Highlight and Weekend Ninety-Four: Cup of Joe
Guest in the most Blog Entries: Dave's Mum, Georgie, as seen in too many to mention
Most Popular Blog Entry: Weekend Sixty-Eight: Big Star Sandwich