This week’s post brings the gang back together on the other side of the water for an early morning brunch at Highlight by Re-Up BBQ in New Westminster. 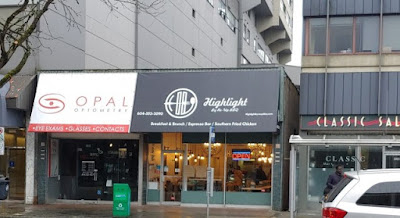 Michel and I got there just before 9, but they unlocked the doors for us anyway.  Even though it’s pretty new on the scene, we’d already been here once before and there were so many delicious-sounding options that we knew it would take a few visits to eat all the things we wanted to try.
Inside, the clean white and wood interior with black light fixtures and blackboard menus on the walls has a bit of an industrial vibe.  From an interior design point of view, I think they did a nice job without having to spend too much. Overall, it’s pretty minimal, but there are some nice little details that personalize the space and keep it from being stark.

I had been debating for two weeks over whether to order the Chicken and Biscuits or the Crunchy French Toast, and I was no closer to a decision as we sat there with menus in hand.  At Highlight, you place your order at the counter and they bring it out to you when it’s ready, but they came to our table and offered to get our drinks started first, so Michel ordered a coffee while we waited for Catie and Dave to arrive. I’d learned my lesson the last time we were there and had brought my own coffee in a travel mug. There is nothing wrong with the coffee at Highlight, except that when you order a ‘coffee’ you actually receive an Americano ($2.75). I like Americanos as much as the next West Coaster, but not for breakfast. I want a good old fashioned drip coffee, and I want a refill when that one’s done. So, big travel mug solves that problem. (Note from Catie: I couldn't figure out why they didn't come to refill my coffee until Julie told me this... The quality of the coffee was great, but sometimes, especially in the morning, it is about quantity. Do what Julie says, bring a big mug!)

This time Catie and Dave were the out of towners, but they don’t really count as visitors because they previously resided in New West. They arrived a little after 9, and already there were several tables full of people. I think word must be getting out because just a couple of weeks ago there was hardly anyone else there when we went.

After decisions were made, we placed our orders and chatted about jazz and swing dancing until the food came. Michel’s order arrived first, followed shortly after by Dave’s. This is the annoying thing about small eateries with small kitchens. Now two people have delicious food sitting in front of them and they have to decide whether to rudely start eating or to politely wait while their food gets cold.
Obviously they opted to start eating, but the rest of the food arrived  just a couple of minutes later, so I don’t think any divorces will stem from this unfortunate scenario. 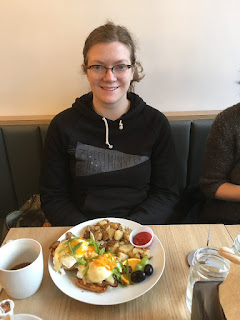 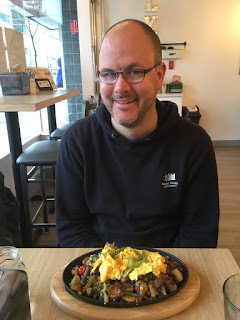 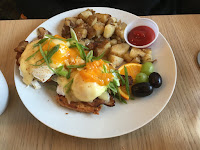 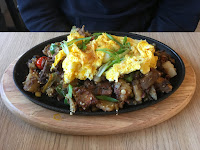 Catie ordered an Americano ($2.75) and the Pulled Pork Benny ($15.95), but substituted bacon for the pulled pork, and added cheese – so she pretty much just made up a new dish. (The bacon is smoked in-house by Re-Up BBQ, which makes it hard to pass up.) She found the staff very open to swapping out ingredients and making changes to menu items, which was appreciated. She said that the biscuit was crumbly and delicious, and the cheese was an excellent addition. The hollandaise sauce was good and made better by the cheese.

Dave had the Brisket Hash ($14.95), which Michel had approved the last time we were there, and the waitress had recommended as the best dish on the menu. Instead of going with poached eggs on his hash, Dave had scrambled. He felt the dish could have used the addition of sauce of some kind, as it was a little dry but overall delicious. Without having tried that dish, I’m going to go out on a limb and suggest that BBQ sauce would be a great accompaniment. 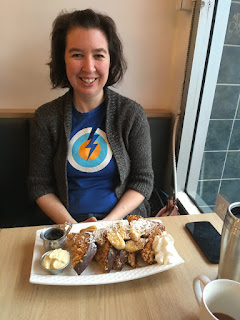 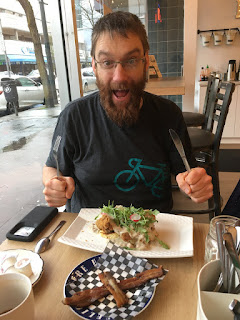 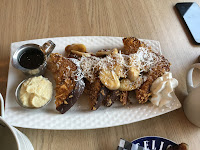 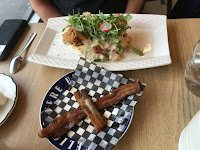 I opted for the Crunchy French Toast with caramelized bananas ($12.95), shredded coconut and crème anglaise. I had no idea what crème anglaise was, but now that I’ve googled it, I know that it’s not, as I assumed, a hipster name for whipped cream (which was also on my plate) but a light custard sauce. I had referred to it during breakfast as mystery sauce, and quite enjoyed it, aside from the fact that it was refrigerator-cold. Food safety aside, I would have liked it better either room temperature or warm, but I’m sure they know what they’re doing. The French toast was made crunchy with a coating of corn flakes. I don’t know that I prefer this to the standard uncoated French toast, but it was an interesting twist and added a textural element that I liked. As with my order of Pulled Pork Pancakes two weeks ago, there was a lot more food than I could eat. Luckily they have biodegradable to-go containers on hand so I can feel like I’m getting a 2-for-1 breakfast deal without the guilt of bringing home a Styrofoam box.

Michel had the Chicken and Biscuits with gravy ($12.95), and he ordered a side of bacon ($3) for us to share. We knew from experience that both the fried chicken and buttermilk biscuits are excellent, so this seemed like a pretty safe bet. Personally, I would have chosen the honey butter sauce over the gravy, but as I mentioned in my previous post, I’m more of a sweet breakfast person. Michel always opts for savoury. He thoroughly enjoyed his meal and his only side note was that the bone-in chicken made it a little difficult to eat. I will judge this for myself next time we’re there. The bacon was good, but a bit on the greasy side for my taste.

By the time we left the restaurant, it was close to full capacity. I’m sure we outstayed our welcome, chatting long after we’d finished eating, but no one hovered over us or made us feel like we should leave. I’ll definitely be back there again in the near future. Highlight is a great addition to Uptown New Westminster, and I selfishly hope it doesn’t get so popular that you have to wait a long time for a table, but I don’t think the odds are in my favour.