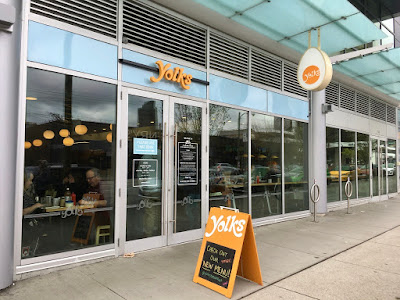 Since moving to Vancouver, we had seen the Brave Bull steakhouse at Fraser and Hastings become Yolks. We had seen a Yolks food truck near the Stadium-Chinatown Skytrain station too. Many years later, we found them on Broadway, so we decided to go.

It was a busy morning, but we were seated at a shared table with two other brunchers. Listening politely, if discreetly, to their conversation, it seemed that they had had quite the night the night before. They were nearing the end of their meal as we showed up, and they were replaced by another pair of intrepid brunchers just before our meals arrived. It's a busy place, so show up with few people, show up early, or be prepared to share space.

The menu, as one may suspect, heavily features the egg. That being said, there are a few surprises on the menu. Catie ordered a double smoked bacon Benny ($14.50), and I selected the white bean cassoulet ($17.50). We settled in to wait for our food, coffee and OJ in hand. 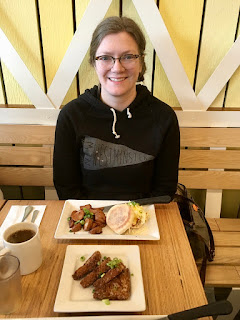 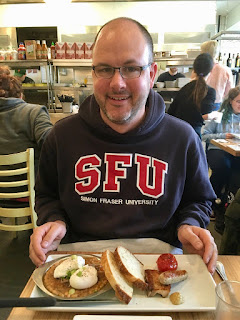 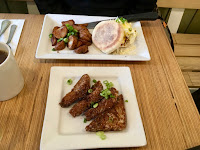 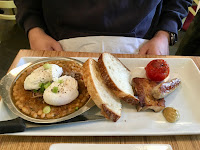 The cassoulet came with pork belly, a sausage, a roasted tomato, sourdough toast, and two poached eggs. Continuing my bravery from Artisan Bistro, I had the eggs runny. What a great breakfast! The meats were flavourful, the beans were soft, and, overall, the dish was delicious. I will point out that the toast was served dry, so I dipped it in the cassoulet. Tasty!

Catie's benny, on the other hand, was a bit of a mixed bag. The benny and Hollandaise were great and she added grated white cheddar (Mr. Feenie, is this your doing?), which she said livened it up, but the lemon-truffle potatoes were *ahem* just not. Perhaps we're just not fans of truffles. On the other side of the potato, the hash brown patties were delicious. When given a choice between the two, unless you *really*love* truffles, choose the hash brown patties. .