Late for breakfast but right on time for brunch, we left our new Victorian secret location in search of food. After a quick wander and a gander at the lines of hungry people outside of other brunch locations, we were drawn into Union Pacific Coffee by the magnificent smell. The delicious scent of coffee and baked goods wafting out onto the street stopped us in our tracks. Even though neither of us had heard of Union Pacific Coffee, we decided to give it a try. 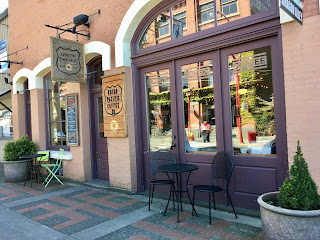 The menu is not very long, but it covers a lot. Dave decided on Smoked Salmon on a Mount Royal Bagel ($9.75) and I ordered the French Toast ($12) and a Flat White ($4). We were given a number and had a look around. 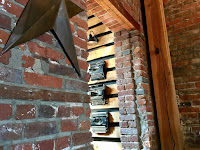 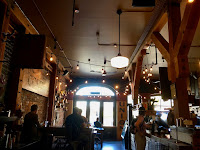 There is an adorable patio in the back that seats (maybe) 15 people. If the day had been a bit warmer, we would have stayed on the patio, however it was still a bit cool and so we went back inside. The decor inside is very industrial. Antique fans and typewriters are mounted on the walls, while plumbing pipe is used not very sparingly. There are a lot of people on laptops, which almost gives it that poser Starbucks feel. To Pacific Union Coffee's credit, they do have a big table near the front that functions as a community table, no laptops allowed! The laptop posers made the place quite busy but a table for two luckily opened up quickly. 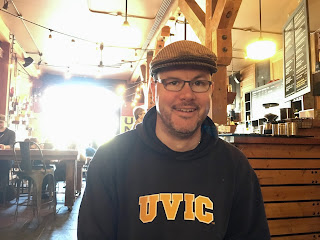 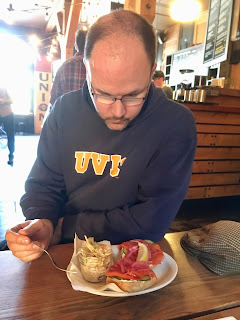 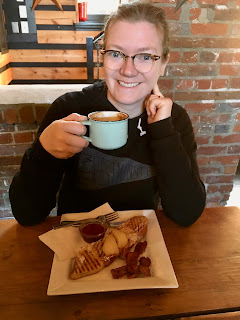 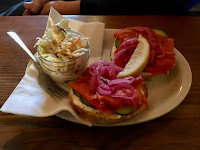 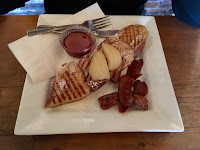 I was also happy with the food. My french toast was hard enough on the outside and soft enough on the inside. It even had grill marks! The toast soaked up the Quebec maple syrup exceptionally well and the bacon was heavenly. The flat white was well made and didn't require any sugar at all. 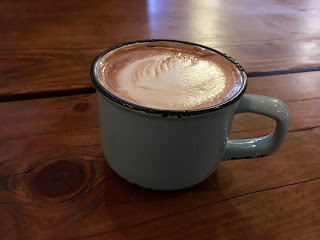 Overall, it was a very pleasant experience at Pacific Union Coffee. A highly recommended coffee bar with good food that we knew nothing about. After our experience, we will definitely go back for more. It would just be nice if there were fewer people on laptops.
Posted by Catie at 9:58 PM