We escaped! We traded in our secret location for the Rockwater Secret Cove Resort. Our weekend adventure took us across to the sunshine coast on a BC Ferry and then a 45 minute drive through Gibsons, Sechelt, and Halfmoon Bay to the very picturesque Secret Cove. 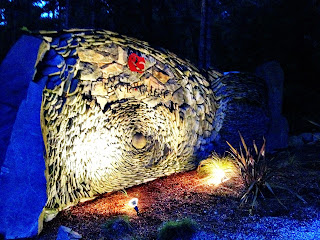 We stayed in a very comfortable cabin on the edge of a rocky cliff. We hiked and slept and curled the few days we had away. Oh, we also ate! 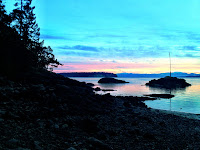 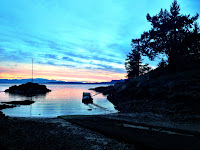 The restaurant attached to this cozy resort is fantastic, expensive but fantastic. We had two brunches here as well as two dinners and each meal was exceptional. We'll only blog about one brunch though because I couldn't resist ordering the same thing the second day...

What could have been so good that I gave up the opportunity for a two-for-one blog post? The Traditional Eggs Benedict. Priced at $16 it is very expensive but it was that good. A simple, toasted english muffin, crisp back bacon, poached egg, and hollandaise sauce seasoned with paprika and made to order. Yum! The Benny came with fresh fruit and hashbrowns. Both Dave and I agreed that on the hashbrown-o-meter, if such a thing were to exist, these hashbrowns would get a 99%. They were really delicious. 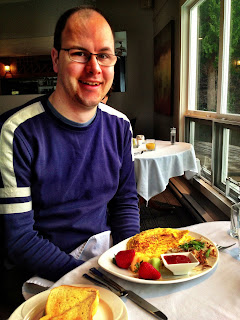 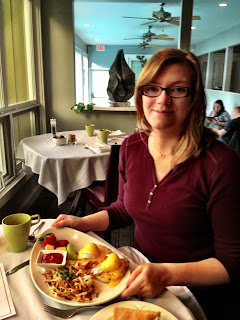 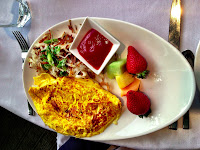 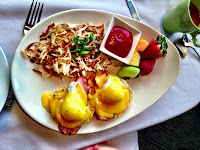 Dave had the Ham and Cheddar Cheese Omelette served with hashbrowns and toast ($14). It was folded perfectly and had what could be considered premium cheddar cheese in it. Dave went on and on about the quality of the cheese and how it melted, so it must have been from a really good cow.

The orange juice and the coffee were not special but the man who served them was. Levi, our server for all our meals and the room service we ordered, was fantastic beyond words. If you visit, say 'Hi" to Levi for us. 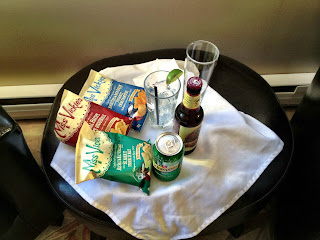 Ps. If you are travelling through Gibsons and are hungry, make sure you stop at Sita's for food. We shared a salad and a pizza and it was homemade goodness.
Posted by Catie at 6:46 PM