It was a cold, dreary day, and we had decided that a tasty brunch would be the ticket to making it better. We set out from our secret location and headed off to Seb's on Broadway. After a pleasant walk, we arrived to find locked doors and cold stoves! It turns out that Mr. and Mrs. Seb had given their employees some sort of holiday to start the New Year. We trudged over to Main, wondering just what we could to to assuage our grief, when Caffé Barney appeared before us. We were hungry and it was open - a perfect combination, since we had enjoyed our visit to Caffé Barney on Granville. 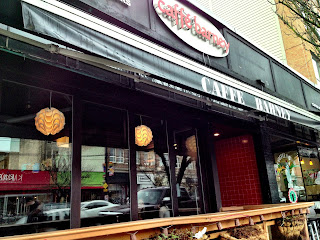 We were seated quickly; I with my orange juice and Catie with green tea. The menu is quite extensive, offering variations on all of our traditional favourite brunch foods. After some deliberation, I settled on the chorizo, mozzarella, and mushroom omelette ($12) and Catie on the traditional Benny (with added bacon, naturally) for $11.

We settled in to wait for our brunch. Top Gun was playing on one big screen above the bar, while the other was showing hockey. The crowd was mostly younger people, but there was a choice of tables. 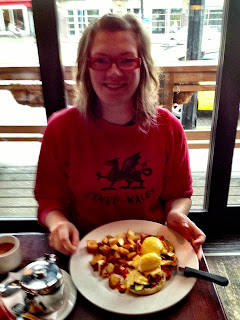 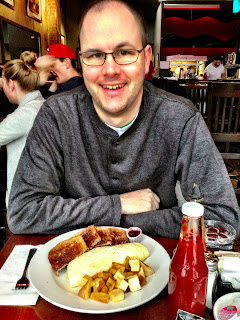 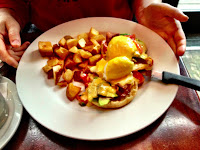 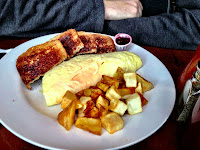 My omelette was tasty, but nothing too exciting. The cheese was only in one place, which made the whole thing rather more like a wrap that used egg instead of flatbread. One might argue that this is a textbook description of what an omelette is supposed to be, but I do like the insides to be cooked in the eggs, not simply scattered upon it and folded in half. The multigrain toast and panfries were good, and I did enjoy the strawberry jam.

Catie's Benny was yummy. "The Hollandaise sauce tastes like it was made in the restaurant, not from a mix!" she said. As well, the bacon was extra-smoky, which I can attest to. All too often 'bacon' becomes a synonym for 'salty meat-like substance.' Not the case here! The English muffin was well-toasted and crispy.

Comfortable food, just what we expect from Caffé Barney. (What's with the extra 'f'? It doesn't make sense in English or French...) Bring a friend here on a rainy day and don't sweat the small details.
Posted by Dave at 9:56 PM