After what seemed like a millennia since getting together with my girlfriends, we all met one Sunday morning at Cafe Medina for a good brunch and a much needed catching up session. 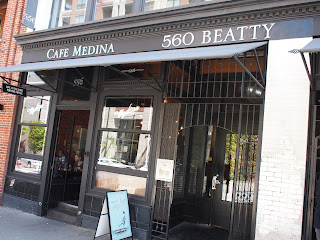 I was a little wary when I left our secret location. I have heard about Cafe Medina's long lines. Normally when tackling a restaurant that has epic waits I arrive as or before they open. My girls aren't as excited about mornings and therefore had asked that we meet at 10 instead of 9 am when Cafe Medina opens it's doors.

I arrived shortly after 10:10, basically on time when taking public transit, and put our name on the ever growing list. A hip host took wrote my name down, as well as three other parties. He then called a name but the lucky name owner's entire party was not present so he moved to the next lucky name. You will not be seated until your entire table is waiting at the door. This fact was in our favour as May and Bev arrive shortly after me and we were seated 20 minutes later, a Sunday morning brunch miracle. 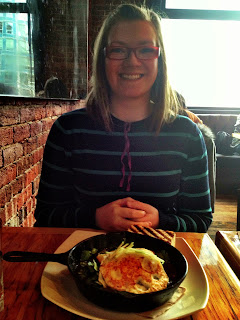 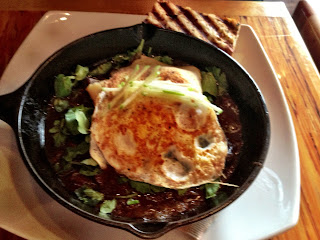 The menu is short but intimidating and pretty expensive. I had the Fricasse at $16, May the healthy Saumon Fume at $12, and Bev the Cassoulet at $15.
On first inspection I was very pleased with my choice. On second impression and tasting I was ecstatic! It was delicious. The braised short ribs were tender and the flavour of the sauce was exceptional. 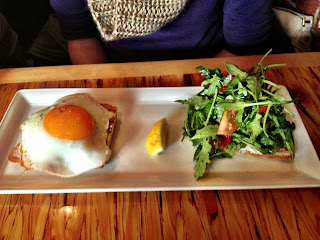 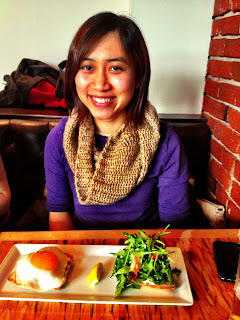 May was a little disappointed in how her plate appeared as she had wanted a hot pot presentation like Bev and I had. However, once she tasted it May was very happy and it disappeared very quickly. May passes on the following helpful wisdom, don't order the Saumon Fume with sunny side up eggs, it makes eating this sandwich really difficult and messy.

We all decided that Bev's choice was the meat lovers dish of the bunch and she loved all of protein on her plate. Hopefully baby Ramona is just as happy.
Bev and I also drank our way through a latte each. Bev's was soya milk while mine was skim. Both lattes were amazing. After our mains, May and I split a waffle with mixed berry compote (or jam as I like to say). The waffle was superb and only $3.15 + $1 per topping. 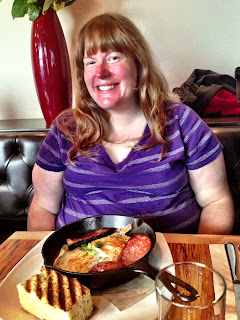 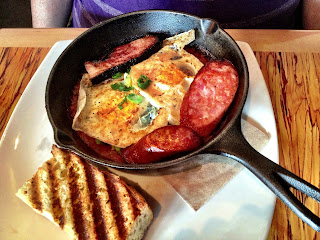 Don't go to Cafe Medina if you are in a hurry. We were seated relatively quickly but it took us an hour to order and receive our food. Yes, we were chatting and hadn't decided on food the first time the waitstaff came by but we made a decision quickly after hoping they would reappear promptly... they didn't. The wait for food didn't bother me because I was in exceptional company and could have stayed chatting with my fabulous girls friends all day.
Posted by Catie at 5:25 PM