This weekend we were joined by a regular brunch participant who is giving blogging a go. Without further ado, I give you, Kim.

Hello denizens of the interwebs it is I, Kim sister of Catie and occasional brunch companion to Dave and Catie. Just like a companion of Doctor Who occasionally the companion gets featured in an episode and this blog post is mine. Oh in case you, dear reader, haven’t noticed I’m a bit of a geek, have been this way since I was a young’un. Anyhow to the story of the delicious Templeton brunch and food held within the diner (cue dramatic music). 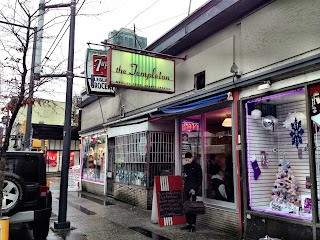 So it was early on a grey, cold Sunday morning when was roused from my incredibly comfy bed to go to brunch with Catie and Dave, not my first but certainly one of my favourite places I’ve visited in the beautiful city of Vancouver. Originally we had planned to visit a completely different brunch place, a fancy, highbrow place with a minimum half an hour wait even within ten minutes of their initial opening. After placing my name in the lineup I proceeded to retire to a corner of the teeny, tiny waiting area, with one ear listening for my name. However after a long period of time my attention was summoned, not by my name being called but rather by my cell phone chirping at me. It was Catie, calling to ask me how long it would be and would I perhaps consider the Templeton instead? It would be a five minute wait at worst. 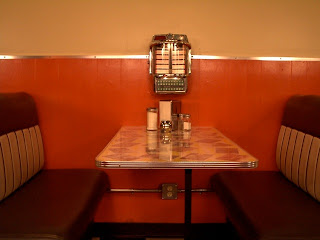 Well as it was ungodly early on a Sunday (translation: before noon for me) and so the sooner I had a proper breakfast the safer the world would be. I quite happily acquiesced to the re    quest and quite nearly ran north on Granville Street towards the 1950’s nostalgia haven that is the Templeton Diner, or so it would appear from the outward appearance of this particular establishment. Once inside I saw that the time warp, while still strong, was not complete most evident by the large flat screen television, on the wall behind the counter of the diner, playing episodes of the Muppet Show.
It was a cacophony of time periods, a flat screen television lording itself over the individual jukeboxes for each booth and a dissonance of sound, the clinking of utensils, the chatting of people, the indefinable song playing with the strong bass beat, all combining into a wall of noise so dense it was nearly physical. We were seated quite quickly and the booth was very comfortable, the waitress attentive but not obtrusive. After a little perusal of the menu we all decided on our feasts to break our fasts.

Dave decided on a classic of huevos rancheros, which was delivered promptly after being ordered with his usual orange juice. Once delivered the huevos rancheros were deemed delicious but too tidy on the plate to be perfect, the messier the huevos the tastier it is. In fact he commented that the meal was wonderful and very tasty but sadly lacking in guacamole. 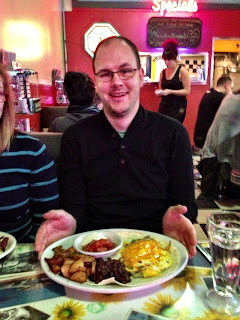 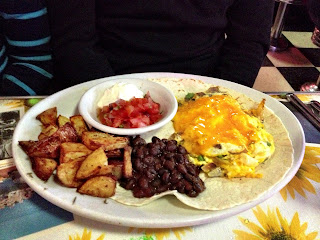 Catie chose the delectable eggs benedict, pausing between savoring mouthfuls to comment on the perfect temperature of the sauce, which was most certainly handmade and not powdered. As a connoisseur of eggs benedict she has developed a discerning palate for this sauce and is seemingly forever in search of the perfect specimen. She had a lovely tea and was quite pleased to see they brought her a small saucer to place her teabag in when finished with it. 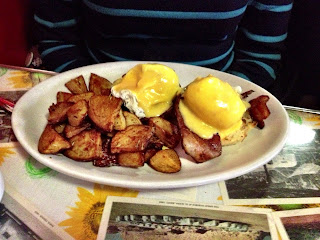 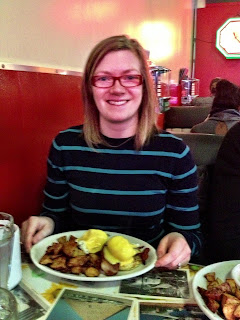 As for myself I, after much deliberation settled on the mangled eggs, which was scrambled eggs with brie cheese, with strips of bacon all of this was placed in a croissant as a sort of sandwich which is much more wonderful than it sounds, which is incredible sounding already so you must go have it. I also had a hot chocolate in a mug big enough to swim in is seemed, and a small orange juice so I could allow myself the illusion of health. 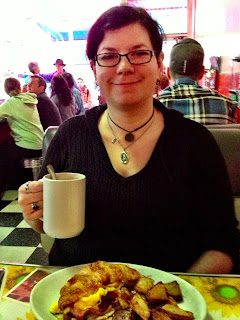 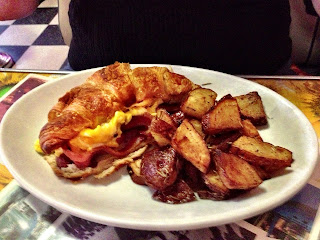 We all were fortunate enough to have hash browns with our meals and these were not deep fired pieces of mock potatoes, these hash browns were in fact real potatoes perhaps even earlier that day they had been potatoes tasting pan fired and beautiful flavored. When the bill came it was a breakfast $9 with a coffee $1 and a juice $1 for me, it was a delicious repast and well worth the whopping $11 dollars for a brunch I shall remember fondly and plan to repeat when I next find myself up at the crack of noon or anywhere up to 3 PM for the Templeton Diner.