This day was all about productivity. We left our secret location and headed to the world of MEC, the Canada Line, and City Hall. After finishing our errands, we came over all hungry. Prowling around, we remembered that we had wanted to go to The Edge Café for some time. They used to be located downtown, but moved to their new digs in 2007. After a brief consultation of the menu outside, we headed in. 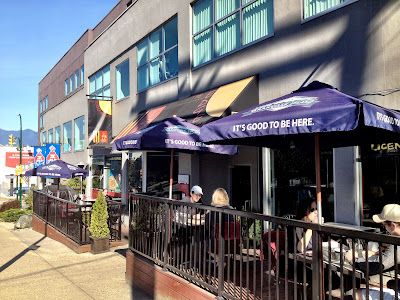 Our server appeared from seemingly nowhere and sat us at a corner table. We were later than normal (no, seriously! We arrived at about 12:30!) and were pleased to see that the restaurant was largely deserted. I had my OJ, fresh squeezed with a strawberry on the side, and Catie, in a fit of luxury, lashed out and ordered one of her favourite beers, a Granville Island Raspberry Ale.

Owing to the lateness of our visit, Catie decided to order the butter chicken and rice ($11,) which came with toasted naan. She determined that it was delicious, and that the portion was quite large! We took home some chicken and sauce leftovers, but there was no naan left. It was "Great!" Light and fresh-tasting." 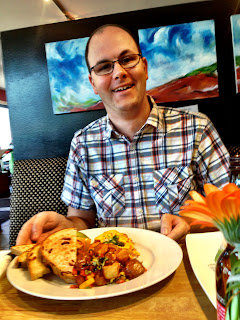 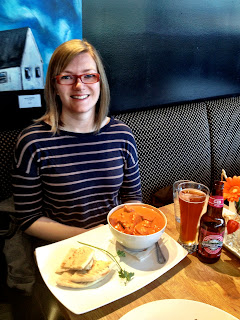 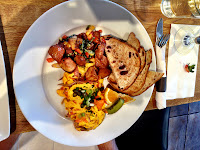 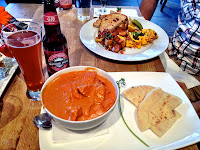 I, the traditionalist, ordered the West Coast Scramble ($11,) which is scrambled eggs with capers, smoked salmon, and onions inside. My toast was made from whole wheat bread which had dried cranberries in - a combination that seems to be popping up at several brunch spots around town. (Perhaps this is the new brunch-toast trend? Remember, you heard it here first!) I also had hashbrowns on the side. I liked the West Coast Scramble, but would have enjoyed it more with less onions. I have a weak spot for capers, and this recipe delivered them in spades. I had no leftovers.

We spent our time at The Edge in a relaxed fashion, commenting on the stories that were shown on the flatscreen TV in the corner. The service was relaxed too, as our server seemed as likely to top up our water as she was to disappear completely from the restaurant. Would we go back? Yes, we would, but not if we had a deadline to make.
Posted by Dave at 11:06 AM