This was a special occasion. We were going on a Bicycle Ride! We headed out from our secret location, pedaling as fast as our little legs could carry us, towards Hastings-Sunrise. Soon we became tired, and the only remedy was brunch at the Roundel Café. 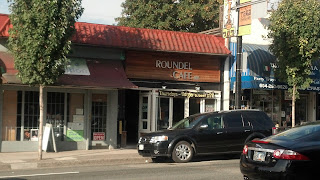 Tucked into a storefront on Hastings near Nanaimo Street, we didn't really know what to expect. There was a line when we arrived, but the waitress said we'd not be waiting long. Kim, Catie's sister, joined us, and we settled in. The Roundel has been here for almost 50 years, and the arborite tables, stools at the counter, and brightly-coloured ceramic pie plates are a testament to diners past. We were ushered to our seats soon enough.

As usual, I had OJ (fresh! yay!) while Catie and Kim both had coffee. (refills! yay!) Unfortunately, the refills were few and far between - we ended up asking the person behind the counter to get one for us, as our server could not be found. 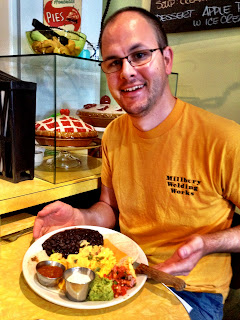 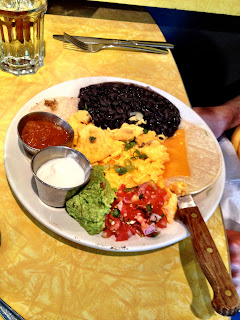 I chose the Huevos Rancheros ($8.50,) which were excellent. Fresh-tasting beans, guac, yoghurt and salsa, eggs from happy chickens and cheddar cheese rested atop corn tortillas. It didn't last long, and was a step up from most huevos I've had. I don't know what the spicy sauce was, but its heat was a good complement to the savoury salsa. Can't beat the price, either! 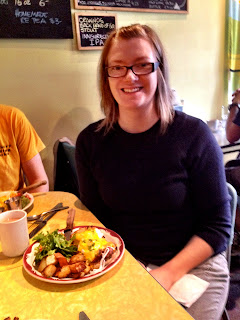 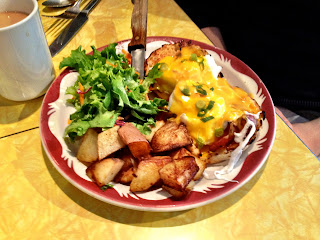 Catie's Benny (the Classic Ham, with bacon added, $9.75) pleased her greatly. There was a sign proudly stating that the Hollandaise is all house-made, and she was happy that it was so. The English muffin was fluffy, and the eggs were poached just right. Followers of our blog will know that the kitchens don't always deliver the eggs as requested, but the Roundel did a good job. 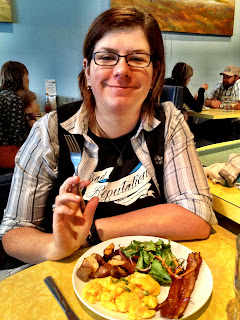 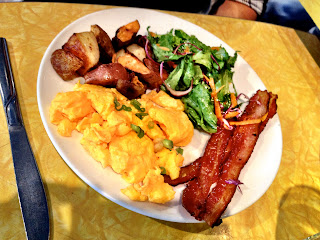 Kim ate scrambled eggs with bacon and hashbrowns for $7. Her eggs and bacon were full of flavour, though the yam in the hashbrowns was not really to her liking. Some yam pieces were undercooked, and their sweetness wasn't really appealing.

The manager (?) dropped off our bill unceremoniously - she'd previously managed to spill coffee on Catie's lap, and to have the bill before being asked if there was anything else we wanted was a bit rude and unsettling. We felt as if we were being rushed out the door to make room for other diners, but the lineup had disappeared by this time. Hailing another waitress, we ordered some dessert.

We ended up with a slice of apple pie ($5, including a big scoop of mode,) which had just the right amount of sweetness and cinnamon spiciness added to the apples. I'd go back for the pie alone - it was that good. To continue ending on a high note, we were brought three spoons with the pie without having to ask for them. Friendly!

All in all, the Roundel Café exceeded our expectations in both good ways and bad. The vintage decor, good prices and tasty food more than offset the short wait. We recommend it, but try not to be seated in the manager's section!
Posted by Dave at 9:01 PM