(Ed. note: This week was a larger group than usual, and with a special guest author too! Hope you enjoy! D.)

The three guest bloggers this week are Georgina, Debra and André, who joined us on a beautiful Vancouver Sunday morning, with the sun bright but not blazing and the pee-boo birds pee-booing away in the foliage. We were all looking forward to the prospect of a fun and tasty brunch together, and we were well pleased with the result. 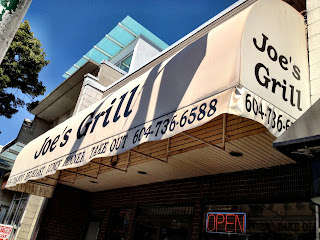 At Joe’s Grill on West 4th Ave., we were seated quickly by an excellent server who was attentive and friendly but not annoying. It was decorated in a simple, retro style, with abundant tables and booths. There's even one table on the sidewalk! The menu features “Eggs and things,” Bennys, griddled stuff (pancakes, waffles, crepes and French toast) and omelettes. We wondered about the difference between Bennys “topped” with Hollandaise or “smothered” with it, and our server explained that Joe likes his thesaurus. Round one to the pedants! 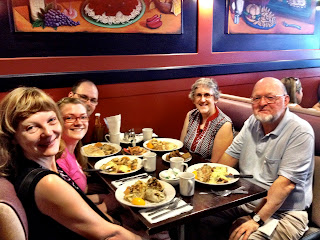 Georgina had the day’s special omelette, with onions, tomato and bacon, and which was “totally delicious.” Also she was pleased that she asked for (and got - sometimes this becomes a theoretical request) only two eggs instead of three, plus unbuttered toast. Round two to a server who listens! 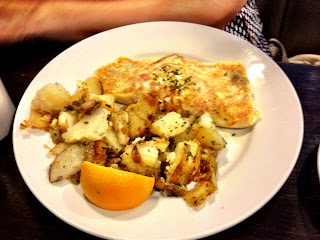 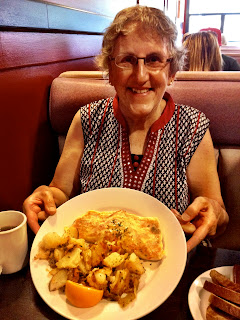 We all agreed that the panfries were great = they were real potatoes fried in a real frying pan without too much fat, and they even had the crusty sticky bits that are so good doused with ketchup (G.’s statement here, and a real compliment). As G. thinks the potato is Mater Nature’s most nearly perfect food, she would love to return for a simple plateful of Joe’s best. So many restaurants, and not cheap ones either, advertise “panfries” and then serve deep-fried identical cubes of possible former potato that even ketchup can’t salvage. Round three to accuracy in menu descriptions!
Debra's breakfast wrap was a delicious blend of scrambled eggs,  bacon and 2 kinds of beans wrapped neatly in a tortilla.    With the hot sauce (spontaneously offered by the waitperson and brought promptly!) it was a bit like huevos rancheros but more manageable.  Debra, who is taking beginner Spanish, says " Muy bueno!" 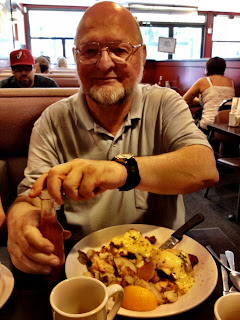 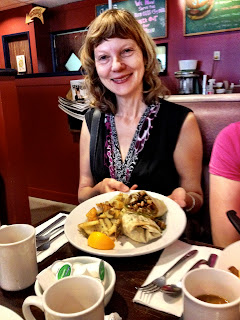 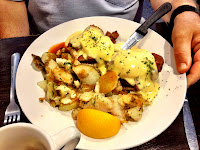 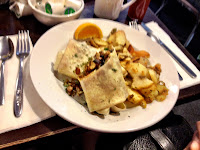 André's chorizo benny was good with the poached eggs cooked perfectly.  "I would definitely go there again."
Dave had Joe's special omelette. Different from the day's special omelette because it is always on the menu though it doesn't differ in it's "totally delicious"ness. 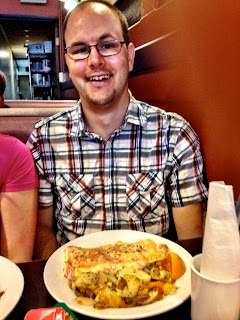 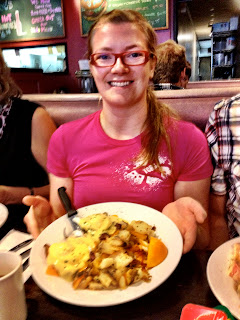 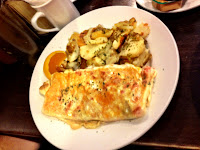 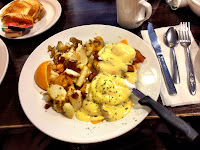 Catie had the special benny which featured bacon instead of ham. The sauce that smothered or topped her benny tasted freshly homemade, which is comforting as well as fantastic!
In summary, then, it was a fine meal with excellent service, affordable prices, hearty portions and fine company. We loved it all and would go back anytime!
Posted by Catie at 7:31 PM