This Sunday brought sunshine, and so we decided to leave our secret location for a wee spot of brunch a little bit later than normal. At the end of our bus ride was the Acme Café, deep in the heart of West Hastings. Its cute design and retro style had caught our eye before, when we were on our way to Catch 122, and we had made a mental note to return. 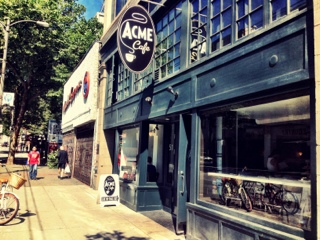 The service was really fast. There were many staff members working, and we were seated quickly. The menu seems geared more to the lunch and dinner crowd, but there were three breakfast specials in addition to what was printed.

In a fit of juvenile enthusiasm, I decided to order a strawberry milkshake. It even came with a maraschino cherry and whipped cream on top! Catie said that she thought it was illegal to serve strawberry milkshakes to people over ten years old, which I am. She ordered a coffee. I liked my milkshake a lot, and she said her coffee was tasty too. 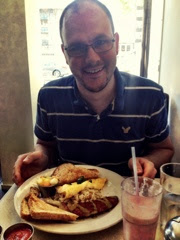 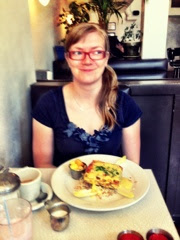 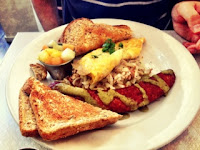 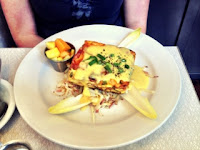 Nothing on the menu really caught my attention, so I ordered Special Number 1. Featuring andouille sausage with chimichurri sauce, this plate also came with two eggs, a mountain of hashbrowns, two pieces of toast, and a little fruit salad, all for $10.50. Catie chose the Baked Eggs Benny for $10.50, which was layered with eggs, ham, Hollandaise sauce, and English muffin. The server explained that it was prepared earlier in the day so the liquid eggs would soak through the English muffin, and then it would cook rather like French toast. The result was interesting, to say the least! It was quite dense, but it tasted good. A change from the expected Benny, for sure.

The fresh fruit salad was a pleasant complement to the rest of the meal, and the jam on the toast (you have to ask for it) was nice and fruity.

We ate. And we ate! These meals are good-sized. After he had cleared our plates, our server asked if we were finished. We said yes, but then he said the magic words. "Would you like some pie for dessert?" 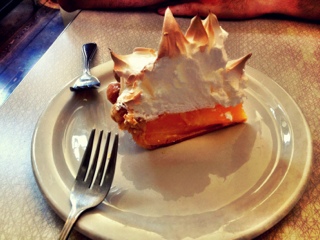 And so it came to pass that a slice of lemon meringue pie appeared at our table. With two forks. The pie did not survive the encounter. It was very lemony, with mile-high meringue and a yummy flaky crust, but it wasn't overly sweet. Catie said that, on our next visit, she'll just order two slices of pie.

Overall, the pie was awesome, and there are definitely points earned for creativity of the Benny. Check it out at 51 West Hastings! And yes, they do take-out.
Posted by Dave at 3:47 PM