If you need to find a group of hipsters on a Sunday before 9am, look no further than the 2200 block of East Hastings.

We had heard of Red Wagon's epic lines and thought we were so clever to beat the rush and arrive early. However, this small diner's reputation of having large lines and upwards of hour waits has prompted the evolution of the hipster masses to become early risers. Sigh... 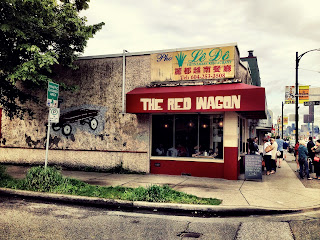 The smells emanating from the Hastings-Sunrise eatery made my mouth water. Then, the line shuffled forward, like the undead from a Romaro flick. As the doors opened, we proceeded inside. The overly trendy crowd filled up the place with me and Dave scooping up the last table. Note for next time: don't move the chairs by holding the top... Too bad for the people who had been behind us in the line. Better luck next time young people! Notable mention: if you are one of the unlucky who doesn't make the first sitting, they will serve you coffee while you wait in line.

My eager gaze fell upon the duck confit pancakes ($14.50), but the traditional two-eggs-any-style ($6.95) with bacon and multi-grain toast won me over, mostly due to cowardice. Dave weighed his options between the crisp pork belly plate ($11.25) and the pulled pork pancakes ($12.50). He, with his boy scout adventure badge showing, picked the pork belly plate with scrambled eggs and sour-dough toast. Of course we also had coffee for me and orange juice for Dave. Dave noted how fresh the orange juice was and suspects that it was freshly squeezed. 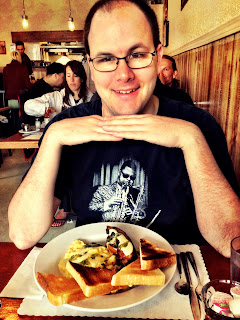 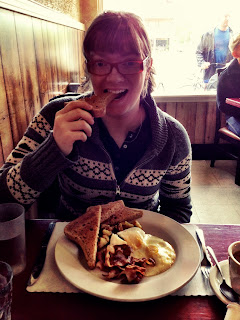 Food started flowing out of the kitchen 16 minutes after they opened their doors. Impressive. Now we would see if the food was worth the long lines and crazy wait times or if it was all just hype.

Our food arrived promptly, but not before I had received 3 coffee refills. The service was friendly, attentive, and fast. My two-eggs-any-style was very large for the price. I always start by eating my eggs on the toast first. By the time I had finished with the eggs on toast I was concerned that I wouldn't be able to eat my bacon and hash browns. Luckily, I found the space. The hash browns were exceptional. The bacon was a little too salty for me. 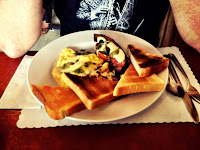 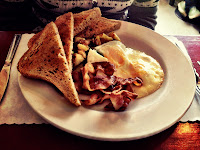 Dave throughly enjoyed his crisp pork belly. It was crisp but not too crisp and had a hint of cinnamon. He experienced a hint of worry, as we always do, when eating the hollandaise sauce (see Benny Bar at Hyde blog) but he recovered and really enjoyed it in combination with the salsa verde and his scrambled eggs.

Great service and innovative food is what you'll find at Red Wagon. The decore is what you would except from an East Hastings diner. Perhaps they could repair the hole in the floor at the entrance? 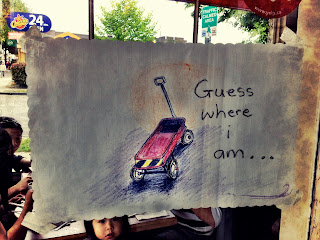