Recently we found ourselves in Reno, Nevada. It was a Tuesday morning, and the crowds were gone from the casinos. Deserted street after deserted street greeted our eyes, but then we saw the Silver Legacy. We went inside.

After a brief wander around, we settled on Café Sedona. A few other couples were there, as it was Valentine's day, but it was blissfully free of heart decorations. I ordered my traditional orange juice and Catie her coffee, and we tried to decide on somehing good.

The Belgian waffle ($6.79) was Catie's choice, tastefully accessorized by a side order of bacon. Note to tourists - bacon in Canada and the US can be different. What you want is called "country bacon." Fortunately, though, the maple syrup was the same. The waffle covered the entire plate! 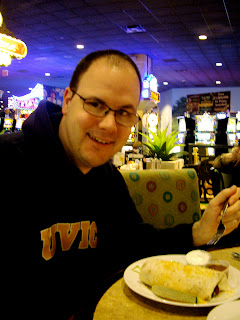 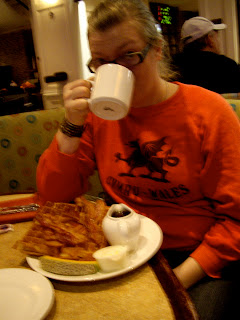 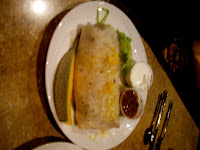 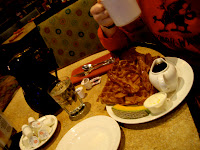 I ordered a breakfast burrito, which, to my surprise, included potatoes! It was a good deal at $8.39, and I especially enjoyed the guacamole. This bacon *inside* the burrito idea is a good one, and I may have to steal it. The servers were pleasant.

Something we really liked about this café was that though it was inside a casino, it didn't smell of smoke (yes, smoking inside is legal, and perhaps encouraged) like others that we visited did. Perhaps this is because it is a newer complex, but, either way, we appreciated it. 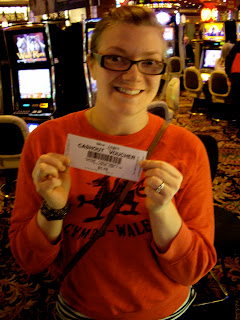 This was a pretty tasty brunch, though it's distance from our home renders it an impractical choice for the title of Perfect Brunch. Would we go again, if we were in the area? I think so, though we'd have to do something about our gambling skill... but that's a different story!