Today was a bit of an exception. Usually, we wake up early, and head out to our brunch as soon as we can. However, we slept in, which made us leave later than normal! This actually worked out for the better, as Burgoo doesn't open until 11.

Now, we've been to Burgoo before for dinner (Hello, lamb stew, hello, cheddar and parsley biscuits) and for take-out, but we'd never managed to wait for them to open for our brunch adventures. Our stomachs made us eat early!
When we arrived, our server sat us at a comfy table for two. A quick look at the brunch menu, and Dave decided on the croque-monsieur sandwich. Catie chose the soup and sandwich special, with sunset corn and chicken soup and gooey cheese grillers. To start, we ordered the scones.

The scones had a subtle taste of orange, and cinnamon butter (that's a good idea) was a very tasty complement. They were served warm, but not warm enough to melt the butter, sadly. 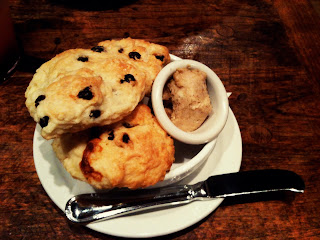 To drink, Catie had the Banff coffee (Bailey's and Frangelico,) and Dave had strawberry lemonade (lemonade with strawberries, yum.) The coffee came with whipped cream and sugar around the rim of the glass.
Our breakfasts both featured cheese, lots of it, and all of it melted and hot. Dave's croque-monsieur was toasted just right, with a mix of soft cheese and tasty crispy bits. The Dijon was subtle, and the ham was lightly salted. Catie's gooey cheese grillers were both gooey and cheesy, and on thick-sliced French bread. 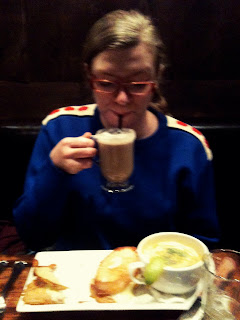 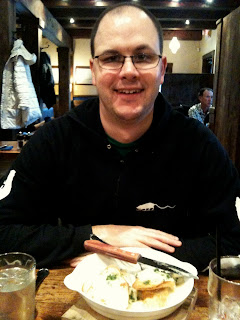 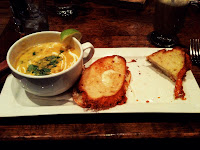 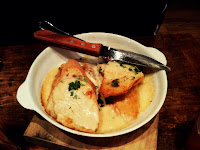 Burgoo's tagline is Comfort Food, and we agree. However, there were a few strikes. Waiting until 11 for brunch is hard to do! Also, admittedly not a fault of Burgoo's, the people dining beside us were sharing the news of their new pregnancy with their friends, which led to some shrieking. The noise of brunch should be "mmm!" not "EEEEEEE!
That being said, the food was comforting, tasty, and affordable. This could be the perfect brunch...
Posted by Dave at 6:52 PM